February 20, 2015
There are plenty of sites and reviews that break down the ADT-1 (the developer edition of the Android TV) 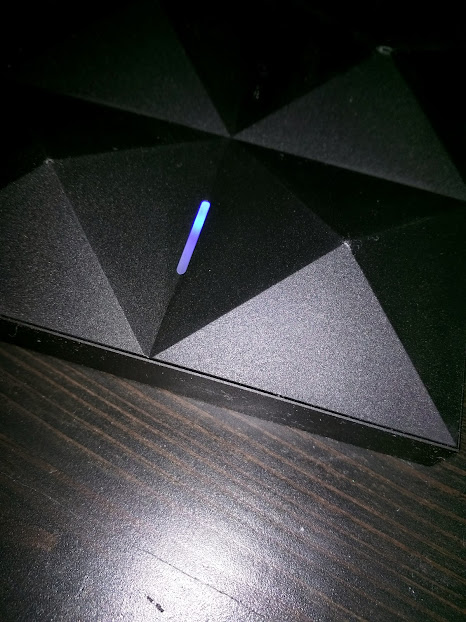 by specs. I won't bother going in to that.
What I will say, though, is that with the Android TV rev of Google's set top box I think Google has hit a winner. I was one of the few who was a fan of the Google TV set top boxes. I thought they were great. So great, in fact, that I bought two. I started with the Logitech Revue, and a while later I added a Sony box to my little collection. The remotes were weird, but they did what I needed. They served up my Netflix and my Hulu and a content from a couple of different DLNA servers up to, and including, the point when I finally settled on Plex for my home media needs. They also served up my music from Google Play Music when I decided to run tunes through my TV. I loved these things. Easy to use, just worked, and I could control them through my phone instead of those weird remotes. Then along comes Chromecast. This little thing blew me away. It did everything I ever wanted to do with a Google TV, and it did it in a little portable package that only cost me about $35.00. Pure genius. I jumped on three of these things. I thought I was set. Hell, I was set. I don't see much of a reason I'd choose to go out and buy a replacement unless one of them dies.
Some time later I heard about the announcement of the Android TV. Cool, Google's not giving up on the living room idea, but I'm not convinced. Why do I need one of these things? Some $99 box that does everything my Chromecast does, plus plays games and runs a few other apps. I don't know that I would have purchased one. I'm still not convinced. However, I decided to sign up for an Android TV developer kit. I'm a developer, I've done some playing with Android, so why not? I have an idea for a DLNA player that's a little (very little) unique, so send me one to play with. DISCLAIMER: My plate is too full, and other than a proof of concept network scanner I haven't had time to complete my DLNA player...I have too many other projects I'm not finishing...
Anyway, I drew the lucky ticket and Google sent me out an ADT-1. The ADT-1 is the developer edition of the Nexus TV. It's a weird little square, with 4 pyramids on the bottom (or the top depending on how you like to set the thing on the shelf), and it's all black except for that little status light. It comes with a game pad similar to your XBox game pad. That's how you control it. Yeah, it's weird, but it's less weird than the various remotes that came with the Google TV models. I hook the thing up, and I'm off and running. It almost does everything my Chromecast does. I say that because I can't cast Plex to it, and the official Plex app isn't yet released in a standalone version. No biggie, I can still run Plex over my Chromecast. That last little bit would probably be a deal breaker, but what makes up for it right now is the game capabilities. I'm not much of a gamer. Yeah, I have my moments with sudoku and Carmageddon, but I don't usually go much beyond that. When I do, however, I play me a little bit of Asphalt 8. Over the Christmas holidays my daughter and I learned that one of us could have a phone, the other the game pad, and we could blow a day or two racing each other in Asphalt 8. This completely blew me away. None of this split screen garbage, and across completely different devices we could have a full game interaction while racing each other. It was an awesome experience. Totally seamless. Being able to play the games along with a very intuitive set top entertainment box completely makes this thing worth every penny of the $99 you'll fork out for the retail Nexus Player. I admit I'm still not sure I'd buy a Nexus Player over a Chromecast, especially since it doesn't yet do everything I use my Chromecast for, but if you're looking for a set top box and you do enjoy playing games on your TV, you can't miss with this thing. It's a tiny little (reasonably) inexpensive home entertainment system. I really can't wait to see what ends up happening with this.
ADT-1 Android TV chromecast geek toys Google TV Set Top Box