Rogue Dead Guy Whiskey - Not What I Was Hoping For 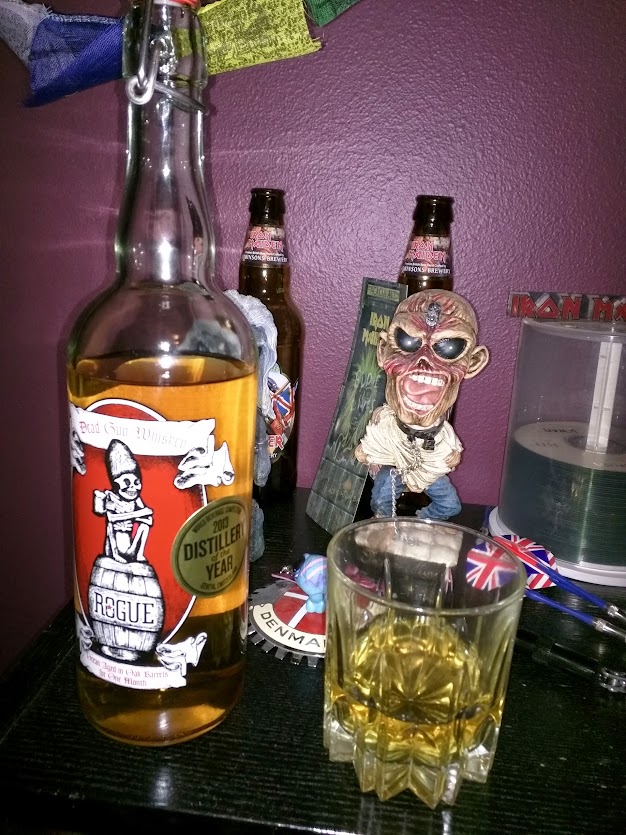 There I am, wandering through BevMo, minding my own business, waiting for my wife to wander back, and sorta looking for the Three Howls Hopped Whiskey (good stuff. Hopped whiskey is one of the great achievements of mankind). When I found it I noticed this other bottle right next to it. Rogue Dead Guy Whiskey. I like Rogue beers, so this did get my attention. I picked up the bottle, looked it over, and when I read "DEAD GUY WHISKEY is distilled from the sweet wort of Rogue's award-winning Dead Guy Ale" I was sold. I had to give this stuff a try. When I got home and poured my first drink disappointment flowed over me like a tsunami and I realized I'd misread a subtle, yet important, detail. This whiskey is not distilled from the ale (as is the case with the Three Howls), oh, no. The Dead Guy Whisky is distilled from the wort that is used to make the ale. No hops, no bitterness to offset the syrupy sweet malt extracted from the grain, just the distilled syrupy malt wort.
So, what do we end up with?
First a disclaimer. I'm not a whisky drinker. When I do drink whisky I tend to lean towards peaty, smoky single malt scotch. The hopped whisky for me stands up pretty well to those, and it fits right in with my tastes.
Now that that's out of the way, here we go.
Off the top, the nose is very sweet. I feel like I might detect just the faintest hint of cinnamon, but mostly whisky paired with the smell of my house on a brew day. (Malt).
They only age it about a month, but in spite of that it's not harsh. I saw one review compare it to white lightning. I'm not getting that. No, not as smooth as a 12 yr. old scotch, but not the punch in the nuts you might get from a Wild Turkey (keeping in mind the last time I had Wild Turkey was somewhere around 25 years ago, but I remember it being harsh as hell).
I might be able to pick up on the oak it was aged in, but that's only just a little bit on the tail end.
Mostly, though, I'm getting the sweet. It's got almost a syrupy mouth feel, and you can taste the wort. On the finish you have maybe just a bit of that oak, and the sweet malt. Just the lightest touch of honey, or maybe maple syrup.
I guess I can't really say that it's bad, but it's not at all what I go in for. On the other hand, if they really had distilled this from the Dead Guy Ale, the hops that come along with this would make it pretty damn good.
I'm thinking this one will be going in to the office with me to go along side that Captain Morgan's Spiced Rum on the TPM's desk that nobody seems to want.
dead guy ale dead guy whisky rogue brewing rogue dead guy ale rogue dead guy whisky whiskey