I like bbq. Who doesn't? I like cooking. I suppose there are fewer people who like that, but whatever. I do well on a grill, but I don't do a lot of smoking. It's just such a long and involved process...which 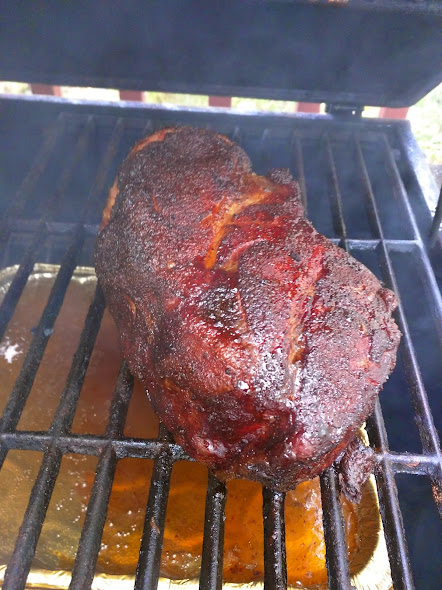 seems a little odd for a home brewer to say, but as I previously stated, whatever.
I've done ribs with reasonably good success, but that's about the extent of it. A couple of weeks ago I decided to do something new. Pulled pork. It turned out crazy good, and the big chunk of pig goes beyond dinner and serves as the base of my lunch for most of the rest of the week.

I won't call it a recipe because it's a chunk of meat and store bought sauce and rub, but here it goes:

The Prep and Stuff

Last night I spent some time making a solid crust of rub on the pork, and put it in the fridge to rest over night. No real reason beyond the fact that I was up and had time to kill.
Next morning I got the apple briquettes going, and heated my grill to about 300 degrees. I moved the coals to the side of the grill under the chimney (because that's on the left, and I cook on the right), placed a pan of water under the grate on the right, and put the meat over the pan of water. I've read the purpose of this is to keep up the moisture while cooking. I've also read that's a myth and it doesn't actually help. I rarely cook meat directly over the fire, and this is no exception. Don't cook over the fire.
For the next 8 hours I check in and throw in a handful of new briquettes. Doing this I'm able to keep the temp between 200 and 300 degrees.
At the end of the 8 hours it's time to take a couple of forks and shred the meat while mixing in the sauce.