I jumped on the Fitbit bandwagon when the first one was released. It seemed like a nifty idea, a device that amounted to a pedometer, but with enough intelligence on the back end to give a fairly useful look at one's 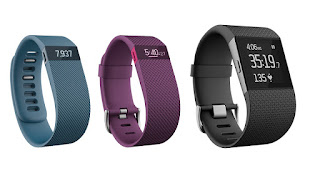 daily activities. I stayed with that version until the day my wife managed to drop her original Fitbit on the garage floor and ran over it with the car. After that, we upgraded to the Flex. I've recently made the jump to the next device. I chose to go with the Charge HR. The Charge didn't give me anything interesting over the Flex. The Surge was too much in that a GPS is unnecessary, and since I won't give up my Citizen watch, it would just look silly on my arm. I decided to shoot for the one in the middle because the heart rate monitor is something that really is interesting to me.
After a few days there are three standout features that really separate this version from my Flex. Two of them are pretty damn cool.

Like so many other office workers with a desk jockey physique, I have obstructive sleep apnea. I'm supposed to use a CPAP machine, occasionally I do. I've been getting better at it over the last couple of weeks, and I'm trying to build on that trend. Because of this I use the sleep tracking feature all the time. It's shown me that I do not sleep at all well, I probably average around 4 to 5 hours a night during the week. The device doesn't help me sleep better, but it does help me to keep track of behaviors that result in better quality sleep.
I should mention that while this feature is not new (sleep tracking has been a feature since the first version), the Charge HR uses a combination of heart rate and lack of movement to switch itself in to sleep mode...It even caught the 45 minute nap I took while watching Blue Bloods the other night. No more trying to remember when I got in to bed the night after I forgot to put the device in to sleep tracking mode.

I like this feature because it gives me an additional piece of information that I can use to try to keep an eye on my overall health. It tracks my average daily resting heart rate (I've found that as the stresses of the work week take over from the wonders of the weekend my resting heart rate is steadily climbing), and it adds another piece of data to contribute to calculating my calorie burn. It also helps to get a somewhat more informative report on my workouts. I don't do much cardio mainly due to knee problems that make even bicycling difficult at times. I lift weights (overall much better on my joints), but it doesn't result in much movement. With the normal Fitbit features, it simply tracks me sitting for 40 to 60 minutes. Add the heart rate monitoring in, and I'm able to track some pretty good numbers. On the upside, the reported heart rate seems mostly inline with my chest strap from what I remember (I haven't tried the two devices together because I have yet to find my chest strap after the move). On the downside, the Charge HR begins to have difficulty finding a good read as I begin to sweat. It's a hit and miss, and the device tries to produce an average rate, but because of the missed reads the average is coming out a little low. I'll just have to keep working with that to see if I can find a better position to wear it while lifting.

This is my first Fitbit with stair climb tracking. In theory, this sounds like a really cool feature. The implementation, however, hits a little outside the bull's eye. The device is equipped with an altimeter that tracks increases in altitude, and counts every 10 feet as a floor. It doesn't track decreases, so it's designed to only track climbing stairs, not descending. In theory, still sounding pretty good.
My commute to work (stay with me for a minute, this wraps back around) climbs and descends several hills. I don't know how many hills, but they're all pretty big. Now, if you go back a bit you'll note that I mentioned I have bad knees. Since I don't like to be seen looking like a 90 year old man, I usually avoid stairs in the office completely. (here's where we wrap back around) In spite of that the Charge HR has reported that I've climbed over 60 flights of stairs in a single day.
I guess the upside of that is that the stair tracking doesn't affect calorie burn, steps, or any other measurement. It seems to be a feature that, although tracked, doesn't fit well in to the overall Fitbit ecosystem.
charge charge hr fitbit the zen of beer wearable ZenOfBeer