I was looking for an Ommegang Hennepin to go with the weekly grilled steak and peppers. It'd been stuck in my head since Friday when for some reason that I have yet to understand, I saw one on the shelf and chose 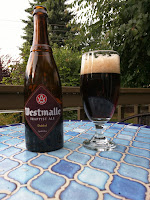 not to buy it. It wasn't there, so I went to looking for something new to try. I finally settled on the Westmalle Dubbel.

Dark, no light gets through this, with a fairly thick head that dies down a little quicker than I'd like, but it pours nicely. No lacing on the glass. I've seen (and made) beers that look better in the glass, but then again, I've also seen much worse. It does look pretty tasty.

And it is. It's thick in the mouth, not quite syrupy, but almost. It feels like it's going to be a very sweet beer, but it's not more sweet than this style usually is. It is, however, quite filling.
The flavor is pretty interesting. There's just a touch of plumbs giving a bit of an acidic fruit, with something warmer and richer underneath. It's somewhere in the range of bananas/vanilla/custard. It finishes with just a little bit of an acidic feel
Although this beer could probably be a small meal all on it's own, it pairs extremely well with a rib eye grilled and saturated in hickory smoke. It's a perfect match. Seriously, if you find one of these have it with steak.
On it's own, it's still very good, but I'm still missing my Hennepin. Oh, well, maybe next week.