The Project (Which can be found here)

This morning my wife saw a meme on her Facebook timeline taking shots at what people are doing with GoFundMe.com, and that got me to thinking. What would happen if I started up a campaign for something purely selfish? Something that I would really like to have, but priorities come first. How would people respond? Would people be willing to help me out? Would they dismiss me out of hand? Who knows?
Then I hopped on my motorcycle and rode to work. I walked into the office 90 minutes before people normally wander in, 2 hours before my first meeting, what to do? Start a campaign, of course.

To read the full description, go here. I'll supply a few more links throughout just cause... Basically, though,

I'm asking the people of the Internet to donate the money required to buy a Gibson Les Paul in the interest of furthering my activities teaching guitar on the side. If I get the funds, I'll buy the guitar, I'll post some pics. If I get some of the funds I'll buy guitar teaching materials and be happy to have saved a few bucks. If I get none of the funds, I'll still be able to blog about it for a while and watch to see how people react. It'll be fun, and there's really only varying degrees of upside. 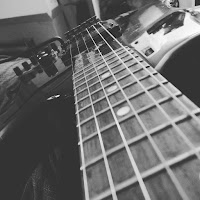 I've stated that I hope to expand my guitar teaching beyond just the one student, who happens to be my daughter. True, if I'm able to build my skills to a point that people are willing to pay me for their services.
I've stated that if people do donate, but not enough for the guitar, I will put the funds towards teaching materials. True.
I've stated that I sold off most of my equipment. True, 4 or 5 years ago I sold off the last of my amps which leaves me with just my guitars, my bass, and, more recently, an IRig.
Do I need the guitar? No. No, I do not.
Could I buy it myself? Yes, but I do have priorities that are well above living out that little dream, especially since I'm not actually out there gigging, and the only recording I do is on an app on my phone.

9 hours in, and no donations. That's ok, I'm in it for the long haul. I'll keep this campaign running until I hit my goal, or until I get tired of it. Whichever comes first.
Although I haven't gotten any donations, I have seen a few interesting things.

The second actual notification was a comment on my campaign (<-- click that). The commenter was asking why, if I really want the guitar, I don't go buy it myself. Fair question. I've listed my response above, and I'll leave it at that. There were two points I found interesting about this.
The first interesting thing, where do you think I'd actually go with that conversation? Does the poster really believe that I hadn't considered the option of buying it myself? Does the poster think I'm a horrible person for cyber begging and think that the comment will motivate me to mend my evil ways?
The second interesting thing, the poster of that particular comment has an avatar that is an image of kids sitting on Santa's lap. I'd like to point out that I'm basically doing what those kids are doing. I'm getting mixed messages from that post.

I've gotten several spam twitter follows from groups trying to convince me to pay them to drive traffic to my campaign. That feels counterproductive to me.

Finally, my campaign has been shared 27 times on Facebook, Twitter, or a combination of the two. I'd like to think it's being shared by people who think other people will help me out, but it could just as easily be people sharing it so their friends can laugh at the picture of me that's attached to the campaign.